Don't Pick the First Hand that Goes Up!

I think you know this right?

Of course, we should give everyone time to think.

But have you ever considered the message it sends to your students when you choose the first hand that goes up?

Asking a question to the whole class and taking an answer from the first kid that shoots up his/her hand, sends a clear message that speed is what is valued.

Now we know that slow doesn't equal stupid, dumb or any other negative word for inaptitude. But do our students? Unfortunately, it might be the perception our students have!

If kids feel anxious about needing to answer quickly, it blocks parts of the brain's working memory. The part of the brain that's used for reasoning or processing. When anxiety sets in, most kids will feel flustered, give up, and just won't raise their hand …ever!

The truth is…. deep thinking is inhibited by speed!

So what can you do? Read on, my friend…

We need kids to think creatively, but creativity is inhibited by speed or performance orientation. If we want our students to engage in creative, intuitive or complex thinking, then we've got to give them time. Here are some ideas that I've seen used and are helpful in creating deeper conversations. I've also labeled the interactions or ideas so that you know if they work best with small groups, partners or independently!

Post 4-5 song titles around the room! Then the students pick the one that best describes their thinking.

For example, if you're talking about theme during ELA and it's about friendship, some possible titles might be: You've Got a Friend in Me, I'll Be There, Lean on Me, and With A Little Help From my Friends.

Once students have picked their song title, they have to talk as a group and come to a consensus as to how the song title would be an appropriate theme for the book!

When students are working in a small group, have them number off, for example, 1-4. Now make sure to tell your students that they are all responsible for paying attention to the conversation and following what the group would like to share!

When sharing has ended, pick a number! Whichever student had that number, gets to share out to the class. If your student gets stuck… no problem! Give him/her time to touch base with the group again. That way the responsibility of an answer doesn't just fall on one student. The student will have support from the group.

Rally Robin works well in Math, Science, and Social Studies after students have studied a topic for an extended period. It works well when students are summarizing their learning or sharing everything they've learned about a topic. First, you will pose the question and provide think time. Then partner/triads take turns going back and forth sharing ideas. The students rally back and forth giving facts and ideas until time is called by the teacher.

Think, Write, Share is the little brother of Think, Pair, Share and often gets overlooked! Poor thing! But not anymore…

Think, Write, Share works well when you want students to construct a longer response that requires more thought than just a sentence answer. After you pose the question, give students plenty of think and write time. This is essential when starting out. Writing isn't how most students are used to expressing themselves but with extended practice, can get good at! During their think/write time, students can look back at notes and around the room. Only after students have taken the time to write out their thoughts, you can have them share with a partner or with the whole class.

While this isn't an exhaustive list of all the ways to engage your students in meaningful learning, I hope that's helped in realizing that the old way of raising their hands isn't what's best for our students! You have the power to make learning fun and engaging!

Pin now and save for later! 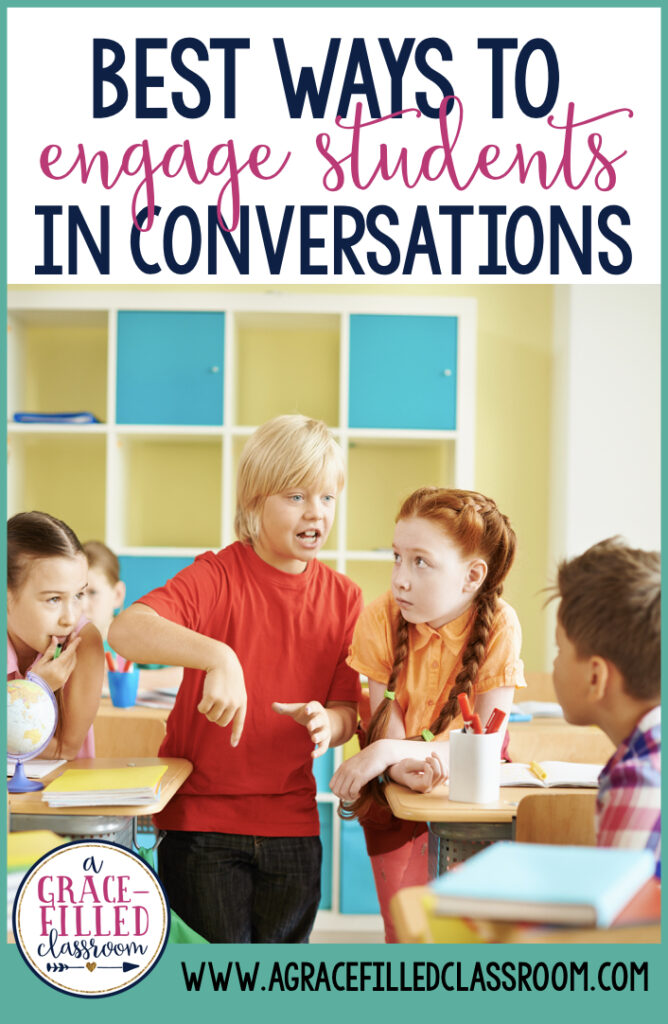 Teaching in a primary classroom can be overwhelming!   Have you ever wondered... How can I meet all the demands of teaching and still make sure I am teaching my students to be good world citizens? How can ... END_OF_DOCUMENT_TOKEN_TO_BE_REPLACED

A Grace-Filled Classroom is a participant in the Amazon Services LLC Associates Program, an affiliate advertising program designed to provide a means for sites to earn advertising fees by advertising and linking to Amazon.com.

This website uses cookies to improve your experience while you navigate through the website. Out of these cookies, the cookies that are categorized as necessary are stored on your browser as they are essential for the working of basic functionalities of the website. We also use third-party cookies that help us analyze and understand how you use this website. These cookies will be stored in your browser only with your consent. You also have the option to opt-out of these cookies. But opting out of some of these cookies may have an effect on your browsing experience.
Necessary Always Enabled
Necessary cookies are absolutely essential for the website to function properly. This category only includes cookies that ensures basic functionalities and security features of the website. These cookies do not store any personal information.
Non-necessary
Any cookies that may not be particularly necessary for the website to function and is used specifically to collect user personal data via analytics, ads, other embedded contents are termed as non-necessary cookies. It is mandatory to procure user consent prior to running these cookies on your website.
SAVE & ACCEPT